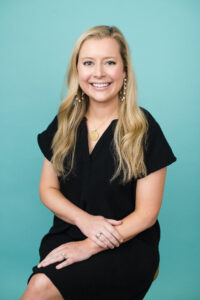 Beaumont native Katie Baker is the 2022-2023 President of the Junior League of Beaumont and has been a JLB member since 2012. Katie has held several leadership positions within JLB, including serving as Communications Council Director on the Board of Directors, Membership Development Chair, and Main Street Market Chair. In addition to JLB, Katie is a member of the Symphony League of Beaumont and is currently a chairman for the 75th annual Neches River Festival.  A “retired” Registered Dietitian with clinical and school food service experience, Katie earned her Bachelor of Science degree from the University of Texas and her Master of Science degree from Lamar University. A “Jill-of-all-trades”, she launched her custom invitation and paper goods brand, Grace Edward Designs, in 2022. Katie and her husband, Clarke, have one daughter, Mary Grace (5) and one son Jeb (2). Outside of volunteer work and spending time with family, she loves to read, travel, and cook. 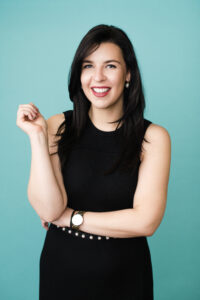 Sara is co-founder of Nichols Norman Law Group, a boutique law firm specializing in real estate, business transactions, and estate planning and probate in Texas. Prior to starting NNLG, she was an equity partner with Orgain Bell &amp; Tucker, LLP. Originally from Midland, Texas, Sara moved to Beaumont in 2014. She received her BA in Organizational Communications and Finance, Cum Laude, at Lubbock Christian University and went on to law school at Texas Tech University School of Law, and now proudly calls Southeast Texas her home. She and her husband of fourteen years, Paul, live in Beaumont and attend Praise Church.

Sara has held several leadership positions within JLB, including serving on the Board of Directors five out of her eight active years. She served on the 2019-2020 Project Research and Development Committee that spearheaded the creation and implementation of JLB’s newest signature project, The O.N.E. Sara was honored with JLB’s Outstanding Community Impact Award in 2017 and the Innovator’s Award in 2022.

In addition to JLB, she has served on the Boards of Jefferson County Bar Association, Southeast Texas Estate Planning Council, Shorkey Center, CASA of Southeast Texas, and the Foundation for Southeast Texas. Outside of volunteer work, she loves to travel, attend community events, and host friends and family in her home. 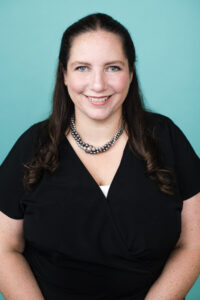 Originally from Nashville, TN, Rebecca moved to Beaumont in 2016.  Before moving to Texas, she also lived in Hampton, VA and Atlanta, GA.  Rebecca holds a bachelor’s degree in Religion and Biblical Languages from Belmont University.  Later switching directions, she continued her educational journey by earning a MS in Accounting from Belmont and becoming a CPA.  She is currently a Senior Manager of Finance for Home Depot and specializes in automation and process transformation within the Controller organization.

Rebecca joined JLB to get involved in the Beaumont community alongside other talented, strong women.  She has enjoyed various volunteer opportunities, working on DWTS, and now serving as Treasurer for the league.  Outside of the league and work, Rebecca loves being involved in her church community, playing handbells, reading, travelling, and has recently started her journey to Black Belt in Taekwondo.  She and her husband, Dan, live in Beaumont with their son and two dogs. 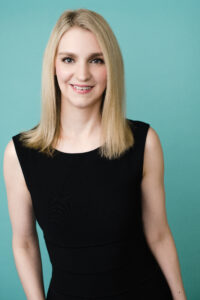 A native Texan, Kate was born and raised in Houston. She earned a bachelor’s degree in economics from the College of the Holy Cross in Worcester, Massachusetts and returned to her hometown to obtain her law degree from South Texas College of Law. She currently works as a staff attorney at the Ninth Court of Appeals. Kate joined the Junior League of Beaumont in 2016 and has held a variety of placements, including;  Spinnings editor, Project Research and Development and CAF chair, and Fund Development chair. She is a 2017 graduate of Leadership Beaumont. Outside of the Junior League of Beaumont, Kate serves on the board of the Jefferson County Young Lawyers Association. In her spare time, Kate enjoys achieving milestones on her Peloton and spending time with her husband and dog. 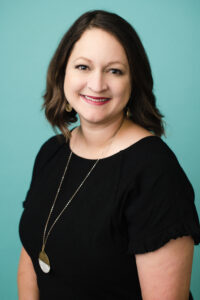 Amanda Yarbrough is currently serving the Jr League of Beaumont as Corresponding Secretary. 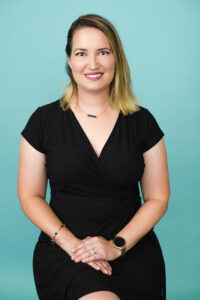 Lindsay relocated to Texas from Michigan in August 2012 and was able to transfer into the Junior League of Beaumont provisional class that same week. She credits her early introduction to the Junior League of Beaumont for the deep friendships and community roots she has grown in the past 10 years. During her time in the league she has been on the Beaumont Children’s Museum, Done in a Day, Nominating and Placement, and Transitioning Youth committees, the Chair of Parenting with Pride, the Business Manager for Dancing with the Stars and is currently the Recording Secretary on the Board of Directors. She also serves on the Community Action Fund in-league committee as a grant reviewer which is one of her favorite things to do with the League.

Lindsay earned her Bachelor’s of Science in Engineering from University of Michigan in 2009 in Materials Science and Engineering. After college she was an accelerator engineer for a collaboration between the Department of Energy and Michigan State University to build the Facility for Rare Isotope Beams. Lindsay and her husband Nicholas moved to Texas so he could join the faculty at Lamar University in the Civil Engineering Department. For the past five years she has been a Key Account Manager for Solenis, a specialty chemicals company, where she helps her paper mill customers meet their quality and sustainability goals. Lindsay is also a regional champion of the SolenisGives program where she plans events and encourages volunteerism for her coworkers located in Texas and Louisiana.

Lindsay has an additional 8 day a week job being a sports mom to her two children. Her hobbies include driving children to practice, provisioning for tournaments and researching equipment. So far her children play softball, baseball, soccer, jiu-jitsu, tennis and swimming. Next seasons on the list to try are basketball and football and the thing that makes her most homesick for Michigan is that Beaumont doesn’t have a youth hockey league. 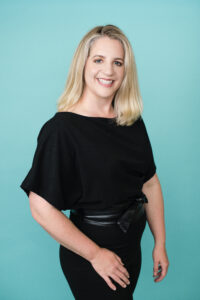 Sarah Wells was born and raised in Beaumont, Texas, but joined the Jr League of San Diego while her husband was stationed in California with the United States Navy.  She loved her time in San Diego, but as they say, there’s no place like home.   The Jr League of Beaumont allowed Sarah to reconnect with the Southeast Texas Community that she loves so much.  In her eleven active years in the League, she has served in many roles including; the Beaumont Children’s Museum before it had walls, Provisional Mentor, CAF Grant Committee, and the creation of Dancing with the Stars of Southeast Texas. Sarah was honored to be selected as the Junior League of Beaumont’s Active of the Year in 2020.

Sarah holds a Bachelor’s Degree in Dance and History from Texas State University.  She loves sharing Southeast Texas History with visitors and locals as the Director of the Clifton Steamboat Museum and celebrating your most special days with Well Done by Sarah Wells. Sarah’s favorite way to end the day is sitting on the porch with her husband Seth, son Hank, and dog Gus. 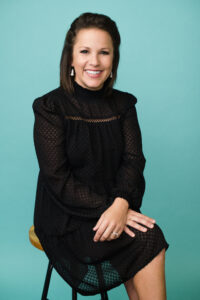 Ashley Willis is currently serving as the Community Counsel Director for the Jr League of Beaumont Board of Directors. 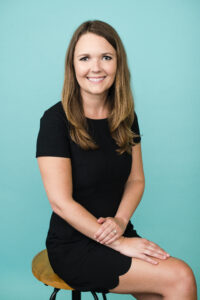 Ashlee Garrett is currently serving as the Membership Council Director for the Jr League of Beaumont Board of Directors. 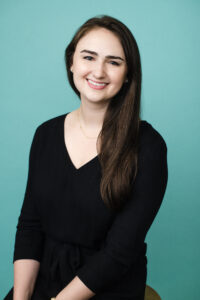 Kate Broussard Thorne is an attorney at MehaffyWeber in the firm’s business practice group. Kate’s practice has a concentration in estate planning and probate law, elder law, corporate and real estate transactions. She has a Bachelor of Arts degree in English from Texas A&M University and a law degree from Baylor Law School.

A Beaumont native, Kate grew up watching her mother and Past President, Johnnie Broussard, serve as an active member and now as a sustainer of the Junior League. Her mom’s service inspired Kate to joined the Junior League in 2017. Since joining, Kate has served in leadership positions such as Spinnings Editor, Main Street Market Business Manager, and most recently, as Chair of Our Nonprofits Elevated (The ONE), our newest JLB Signature Project.

Kate has maintained a lifelong commitment to community service and volunteerism. As an attorney, Kate volunteers through the Jefferson County Bar Association Pro Bono Program and Veteran’s Legal Clinic. Kate currently serves as a board member for the Greater Beaumont Chamber of Commerce, Beaumont A&M Club, the Jefferson County Young Lawyers Association, and the Michelle F. Mehaffy Inn of Court. She has been recognized by Super Lawyers as a Texas Rising Star, by BestLawyers as One to Watch in Trusts and Estates and Real Estate, and by the Southeast Texas Young Professionals as a 40 Under 40 Honoree. Kate and her husband, Wil, live in Beaumont and enjoy attending community events and spending time with family and friends. 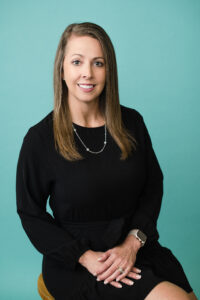 Brenna Rodriguez grew up in Southeast Texas and works as the VP of Operations at Harbor Healthcare. She has been with the company for 16 years and works with Harbor/Beacon Hospice and Palliative Care teams across the country. She graduated from Lamar University with a Bachelor of Business Administration.

Brenna Rodriguez is currently the Past President of the Junior League of Beaumont. She began volunteering with the league in her provisional year (2012) and was awarded Provisional of the Year in 2013. Brenna has held many positions within the volunteer organization, including Resource Development Chair, Main Street Market Publicity, and Planning Council Director roles. She volunteered as the Lemonade Day Chair the first year Lemonade Day was brought to Beaumont and became a league project in partnership with the Greater Beaumont Chamber of Commerce.

Brenna has expanded her community outreach by volunteering with the Make-A-Wish Foundation for the last six years and has been involved in over 50 wishes granted to kids in our area. She also volunteers as an Ambassador Emeritus for the Greater Beaumont Chamber. In 2021 she started a neighborhood group in her community to connect neighbors and to raise money each year to donate to a high school senior that lives in her neighborhood. Last year four seniors received scholarships. She was a 40 under 40 honoree in 2013 and was awarded the Harbor Star Award for excellence in the organization. 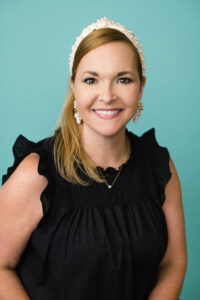 Kara Hawthorn is honored to serve as the Sustainer Advisor of the JLB Board alongside a dynamic group of leaders and fantastic President, Katie Baker.

Kara joined the JLB in 2005.  She served as chair of several committees and in leadership roles including Main Street Market Chair, Communications Council Director, Community Council Director, Planning Council Director, and President.
Through her volunteerism in the JLB, Kara met and worked with the most outstanding members of our community.  She utilized her skills and connection from JLB to volunteer, coordinate fundraising events, and serve in board positions for other phenomenal non-profit organizations in our community.
When not volunteering, Kara serves as a mediator and mediation trainer.  She is the Executive Director of the Dispute Resolution Center of Jefferson County.

By continuing to use the site, you agree to the use of cookies. more information